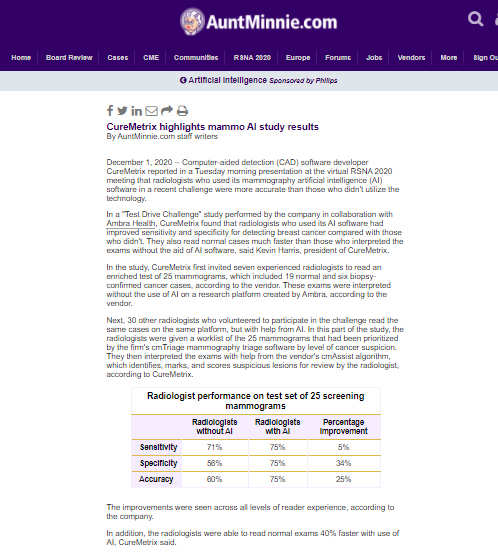 As mentioned in the July 2020 edition of DOTmed HealthCareBusiness News, CureMetrix was highlighted as a healthcare innovator for women's health and as a breast imaging product that helps with coronavirus backlog. With the COVID-19 pandemic pushing back breast cancer screenings for many patients, there is more reason than ever to bring products to the market that help radiologists manage their growing worklists.

COVID 19 and Radiology: There's Never Been a Better Time for AI

The COVID 19 pandemic has already overwhelmed our healthcare system, creating a ripple effect that puts additional strain on radiologists—and this will have serious impacts on breast cancer patient outcomes. In order to enforce social distancing and preserve resources for critically ill coronavirus patients, many imaging centers have put routine scheduled screening mammograms on hold for now. However, this means that those imaging centers will soon have to deal with the challenge of managing backlogs, keeping up with patient demand and ensuring accuracy in diagnosis at the same time.